The collectibles market is buzzing with the news of two new world record prices that were hammered down in the past 10 days. 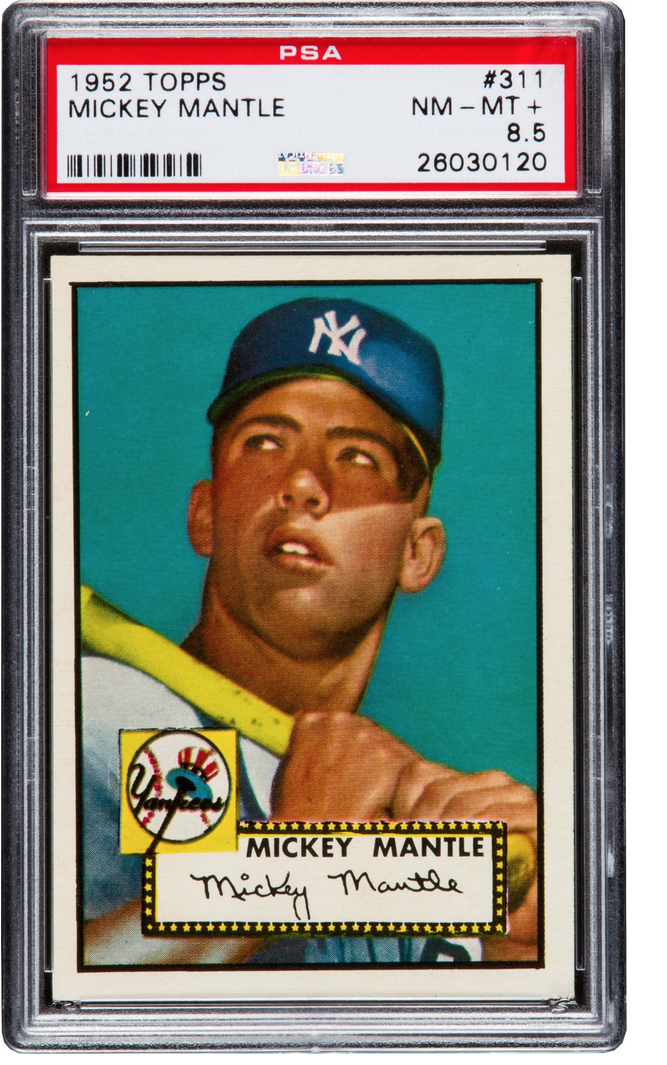 On November 17, 2016, A Superman comic book number 1 that was CGC graded 4.5 was sold for $358,500. We have attached the article with the news which is very important to readers of this blog to read for two reasons.

First, the comic book was CGC graded, the very same service that has now begun authenticating and grading Vintage Concert Posters. Secondly, the attached article clearly states that collectors are paying these record prices for items that are totally original and UNRESTORED. Every high priced comic book is now third party graded by CGC as collectors demand an impartial, third party opinion when they putting to work their hard earned money. How lucky we all are to be here now, on the ground floor of CGC concert posters.

On November 17, 2016 a Mickey Mantle Rookie Baseball Card PSA Graded 8.5 was hammered down for a world record $1,135,250. In this same sale 20 cards exceeded $50,000, all 20 of which were of course third party authenticated and graded by PSA, the leading third party grader and authenticator of cards.

Both World Record sales made NATIONAL NEWS as the widespread interest in TANGIBLE ASSETS continues to grow in this crazy environment that we all now live in.  As we have previously reported, many people are more comfortable having their assets in something they can understand and hold in their hands and that is private and confidential. This compares favorably with a blinking number on a computer screen that changes every second and is subject to hacking, legal seizure, etc. In any event, it would be hard to argue that Vintage Concert Posters are ridiculously cheap compared to every other collectible. We continue to advise you to fill in your collection now, because what can’t last forever (bargain basement prices) definitely won’t.

With the launch of our new website, the comments function will now work. We hope that if you are a regular reader of this blog, that you will become part of the conversation. Please share your thoughts with us!

50th Anniversary of The Summer of Love!

It’s been widely reported in this blog that Vintage Concert Posters have been receiving continuous and widespread recognition and exposure at major museum exhibits around the world over the past few years.

This exposure has added a major source of legitimacy to these amazing artworks and has resulted in a huge increase in the number of people that are now collecting these posters. 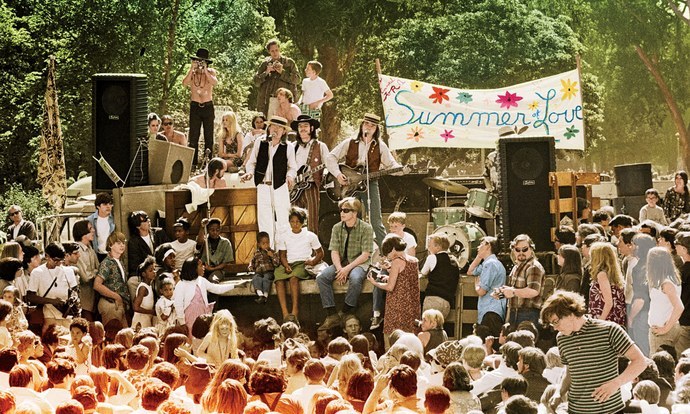 All of this will be DWARFED by the international exposure that is now, suddenly, just weeks away. Beginning on January 1st, the world will be celebrating the 50th Anniversary of The Summer of Love. The city of San Francisco is planning a YEAR LONG CELEBRATION, with no less than 3 major museum exhibits, multiple custom tours, and countless musical events.

The Monterey Pop Festival to be held this summer is the culmination of a separate 5 month celebration to be held May- September, 2017 in the City of Monterey!

In addition, there is sure to be major worldwide television, newspaper and magazine coverage of these events, as well as historical retrospectives of the 1967 Summer of Love.

In short, expect for the whole world to have a case of “Sixties Mania”, that is sure to influence the sights, sounds and fashions of the coming year. (We previously reported that Nike released a new shoe with graphics of 1960’s Concert Posters).

We have tirelessly reported on the lollapalooza effects that have taken the market for Vintage Concert posters by storm, 1)Incredible beauty, 2)Extreme Rarity, 3)Ridiculously Cheap Prices, and very critically, 4) Unsurpassed Historical Importance.

How many collectibles can you name that enjoy an entire year of celebration and publicity? All of this is not theoretical, or destined to happen at some indefinite point in the future. It’s all happening NOW and will continue to accelerate the rate of change we are currently seeing in this fast moving and exciting marketplace!

As a reader of this blog, we implore you to use the information you have NOW, while YOU ARE STILL WAY AHEAD OF THE CURVE. Use the coming weeks and months to start or add to your collection while supply is still available and prices are still affordable. You’ll be glad you did!

To learn more about San Francisco’s year long celebration of the 50th Anniversary of The Summer of Love, click here >>

To Learn more about the 2017 Monterey Pop Festival and 5 month Celebration, click here >>

Last week, a major article on certified collectibles took social media by storm and went viral through the collectibles industry. The article reports that our nation’s skyrocketing debt has led to a distrust of our nations currency and the future value of it. 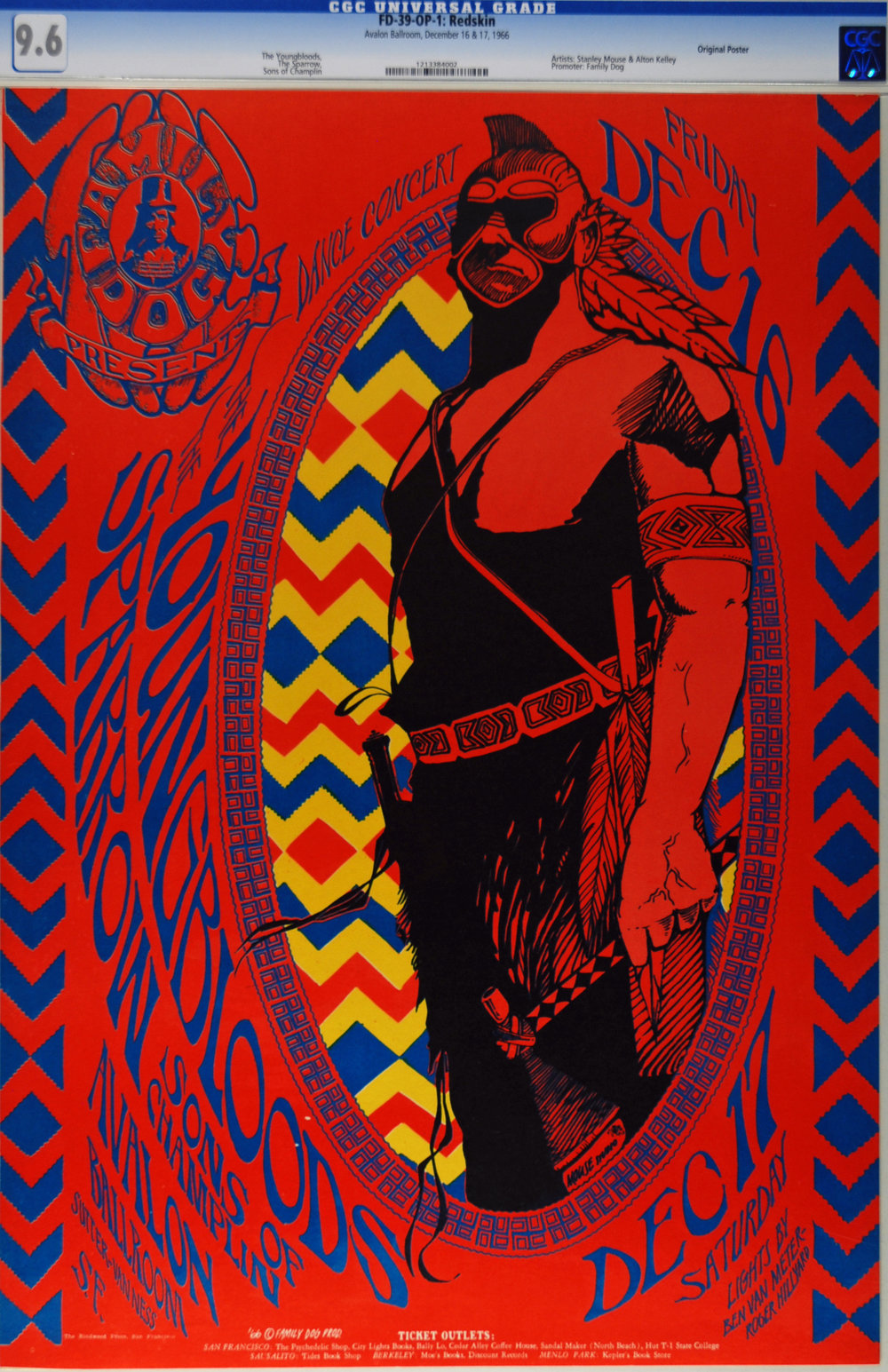 The article says this distrust is encouraging people to turn to tangible assets that  can be held in your hand and where the value can be easily understood. There are 3 pictures in the article, 2 of a comic book and one of a baseball card, all of which have been independently graded and authenticated by a third party service. The 2 comic book photos were of a CGC graded comic, the very same service that is now revolutionizing the market for Vintage Concert Posters.

When you read in this article about $3 million comic books and $17 million Ferrari’s, it’s easy to understand why experienced collectors are now entering our marketplace and snapping up the most desirable material they can find, as fast as they can.

It is not lost on the people we deal with that these posters were created in ridiculously low numbers, the vast majority have been thoroughly damaged, and the historical importance of this material is unsurpassed.

All of sudden, this year has sped by and the New Year is staring us right in the face. 2017 will be highlighted by the 50th Anniversary of the Summer of Love, and the focus and interest on the posters of this era will enjoy monumental attention. Our advice is to fill the holes in your collection now, while the material is available and can still be acquired for 5-10 cents of what comparable collectibles trade for.

If you are looking to sell posters, this is an excellent time, as demand far exceeds the available supply of top material. Please contact us to review how you can get immediate top prices for your holdings. We will buy your entire collection, we don’t pick and choose.

Whether buying or selling Vintage Concert posters, we look for to helping you achieve your goals!

To read the article on the collectibles market, click here!

­­Last Weekend. The Annual TRPS Festival of Rock Posters was held in the Hall of Flowers in Golden gate Park. This event is the primary gathering of dealers, artists and collectors, of vintage and modern concert posters. This is the singe greatest opportunity for collectors to meet with and buy directly from the top poster dealersand get posters signed by the artists . The show is also a perfect opportunity meet like minded collectors

This event is the collective effort of The Rock Poster Collectible Society. TRPS is an all volunteer organization committed to preserve and promote 1960’s concert poster art. The staff for TRPS was gracious and attentive, and their collective effort makes this event possible. It is their mission to create public awareness for this incredible body of work. The efforts of this organization are greatly needed in this ­ever-expanding market. As interest in collectible concert posters continues to surge, it is essential to have an organization that is independent and objective. We have always believed that for  this market to grow and attract new buyers there must be a commitment to  share accurate and credible information about values and

If you are not currently a member you can  join here : http://www.trps.org/membership/ 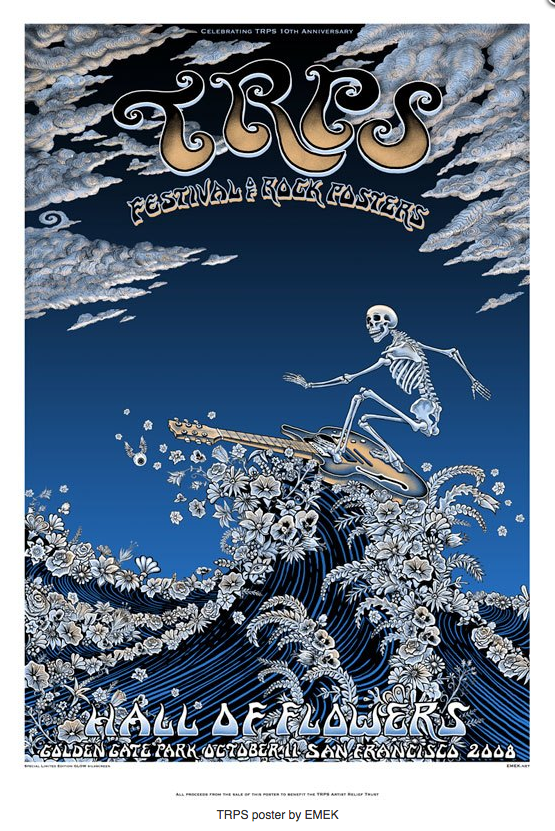 Obviously, the city of San Francisco is the ideal backdrop for the poster show as it was the original production/distribution point for the majority of these posters. To this day the city still carries the magical qualities that allowed the 1960’s music scene to flourish. The innovators of San Francisco poster art were on hand to sign their masterpieces for hungry fans. Wes Wilson, Mouse, Moscoso, David Singer Mari Tepper, David Byrd, Lee Conklin, Randy Tuten joyfully signing and sharing memories from the day.

The modern poster artists get a lot of attention at the TRPS show as well. Their passionate fans line up for hours to get copies of limited editions and rare variants from their favorite artists. The works of the of EMEK, Chuck Sperry, Marc Spusta, Matt Leunig (to name just a few)were on display and selling briskly.

It was an active day at the PAE table as well. We were delighted to get to meet with customers that we only know from the phone and email and put a face with them. It was great to get feedback from folks we work with all year long. Everyone was gracious and loved the information that we put out in this forum. We also lined up several longtime collectors who will be selling their posters in our auction in the coming year.

The energy in the room was palpable and the interest in the vintage posters is stronger than.  The intensified interest in the third party graded material from CGC was a hot topic.

All Said and done, the 2016 Festival of Rock posters was a terrific time, it’s great to meet with all of the people that make this incredible collectible a reality.

Right on the heels of the news about the “ You Say you Want a Revolution- Records and Rebels 1966-1970” exhibition at the Victoria and Albert Museum in London comes a major article and online gallery featuring vintage 1960’s concert posters by The Guardian newspaper.

The collection was formed by the late Felix Dennis, a very successful and famous entrepreneur in Great Britain. Dennis is most widely known in the U.S. for his founding and ownership of Maxim magazine. In addition to expanding interest both in print, and online, the posters themselves were on display October 7 and 8 in a gallery in London.

While this continued widespread exposure to these posters is very important, this story is important for two other reasons.

First, anyone associated with this hobby will tell you that there is TREMENDOUS interest in these posters overseas. Icons such as Jimi Hendrix, Janis Joplin and the Doors are WORLDWIDE legends that transcend borders. This is one of the reasons these posters are more exciting than many collectibles that only enjoy collector appeal within the United States.

Secondly, we can tell you that we have many famous and influential clients that are active collectors of this material. They understand the myriad of reasons why these posters are desirable and they clearly have the financial wherewithal to acquire the finest and most desirable pieces.

What’s most exciting, is that unlike almost all other collectibles, the value of these posters have not yet grown out of reach of “the common man”. You can still acquire a museum quality poster with tremendous historical importance, that exists in tiny quantities for the same price charged for mass produced pieces of crap in every “Art Gallery” in America.

You won’t find the artwork hanging in your friends house’s hanging in any museum, but your Vintage Concert posters are being featured and praised everywhere, all over the world! 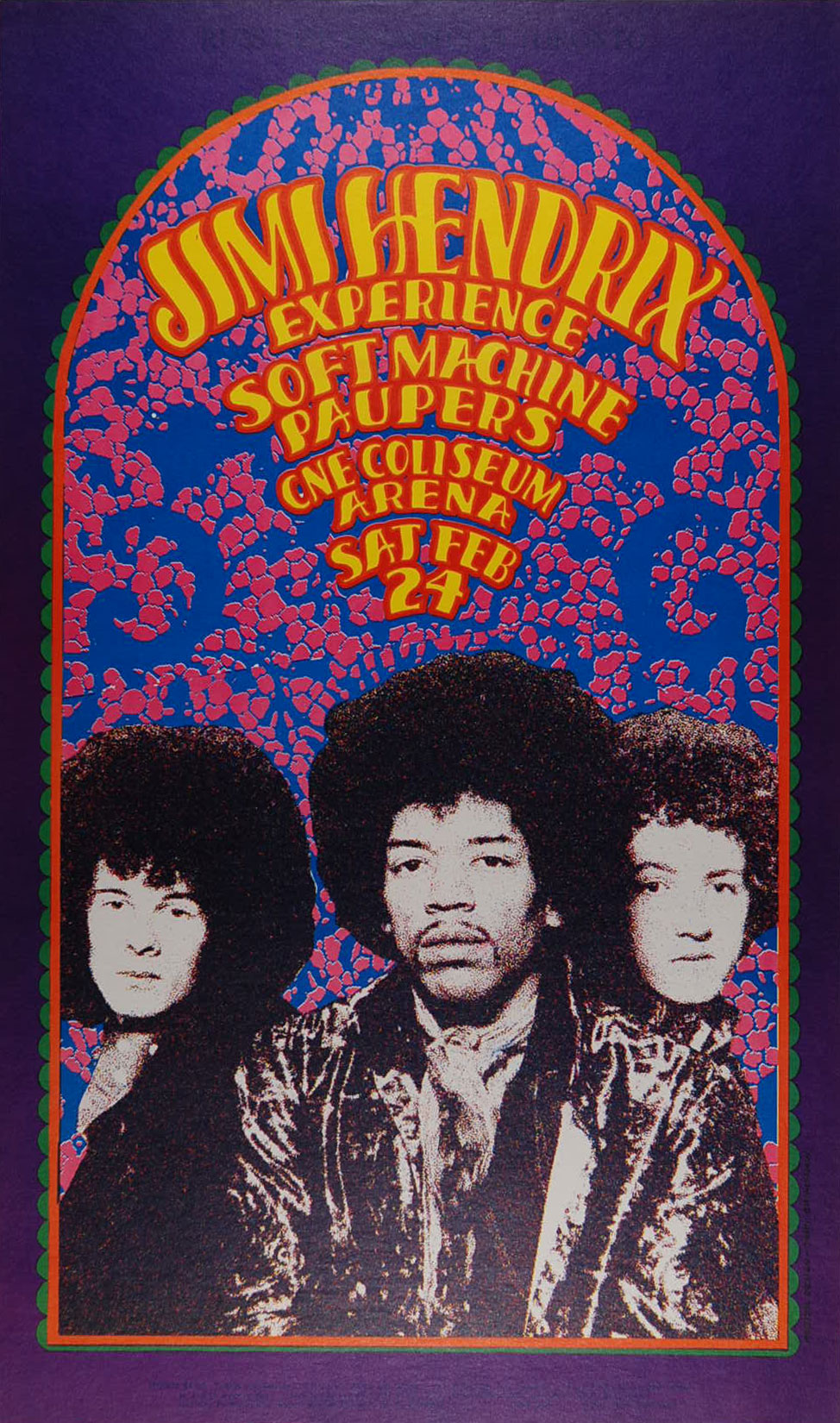