The term iconic is often attached to this poster, but even that is insufficient when attempting to sum up this mystical rendering from the master of psychedelic poster art, Rick Griffin. Those who have been previously initiated into the concert poster world will gush endlessly about this poster, as for many of us it was our first crush, the gateway drug that lured us to this fascinating collectible.

BG-105 is arguably the most important Jimi Hendrix poster ever created. Yes, we said it! There are certainly Jimi Hendrix posters that are more valuable and exceedingly scarcer, however, this piece has a magical quality that no other poster can achieve. Since the day it came off the press, it has attracted collectors like moths to a flame. 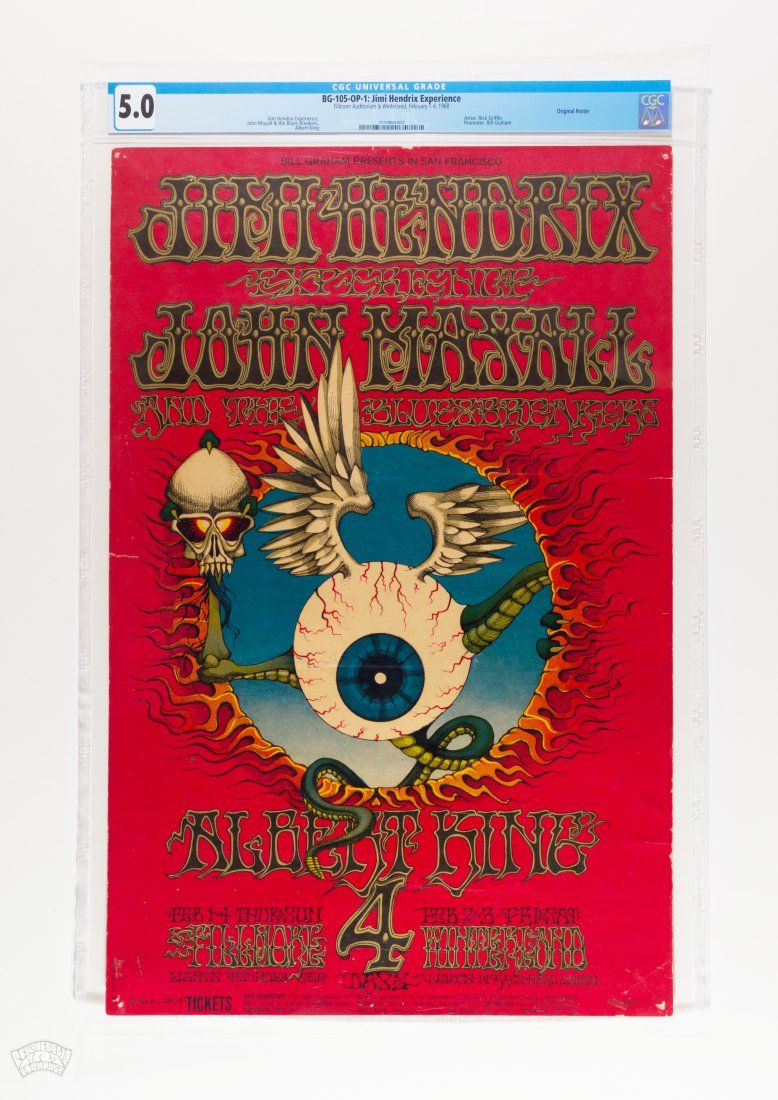 Intrinsic value aside, for the time being, the question that is foremost on the minds of the curators at PAE today is, why are so few copies of this hallmark poster being offered for sale to the public?

A few scattered BG-105-OP-1's come out of hiding every year, but for the most part, high-quality copies are not being submitted for grading or available for public sale. As the primary online marketplace for graded posters, PAE understands that it is relatively early in the game for Rock Posters as certified collectibles. It's reasonably clear to us in this case that the original owners of these posters are holding them tightly. As a result, we don't have a clear understanding of what's out there. Additionally, many original collectors are either unaware of or resistant to 3rd party certification and grading.

The current CGC population report indicates that only 22 copies of the Flying Eye have been graded to date, with two CGC 9.8 copies leading the pack. In contrast, the most talked-about poster from the Family Dog /Avalon Ballroom series, the FD-26-OP-1 "Skull and Roses" has had 60 copies submitted for grading so far.

The BG-105 poster was printed in the same quantities as the other Fillmore posters from 1968 so it stands to reason that most existing copies are buried deep within private collections. Additionally, the poster is so well-loved that many copies were displayed to death via puncture wounds and repeated paste-ups. Still, this does not fully explain the relative dearth of available copies.

We are left to assume that the reason the 105 is not coming out for sale is that the current owners are waiting for the piece to ripen...no one wants to be the first to the party. It took the first $50,000 auction result by PAE to get copies of FD-26 to come out of hiding, so we believe that a similar auction result would allow this poster to fly to the next level.

In service of bringing a high-grade copy to sale, PAE is creating an incentive. For any collector who possesses a CGC 9.6 or higher and wishes to consign with us, we will waive the seller's fee.

We hope this offer will shake loose a gem copy of the poster... let the games begin!