Right now, you can buy incredibly rare, drop-dead gorgeous works of art in museum-quality, mint condition for under $1,000! You can even purchase most of the very rarest and most famous works of art for well under $10,000!

When you realize that the most desirable rare coins, stamps, and baseball cards start at $100,000 and quickly escalate into the millions, it's easy to understand why my clients and I are putting to work every spare dollar we possibly can at these rock bottom, bargain-basement price levels.

All of the works that we're focused on acquiring were originally issued in numbers of 100 to 2500 pieces. In comparison, coins, comics, stamps, baseball cards, and most other collectibles were routinely issued in a range from tens of thousands to hundreds of millions. This is why the world's most savvy collectors are now aggressively snapping up every piece they can track down.

Please understand that these works of art were initially produced as advertisements for live events. They were posted on telephone poles, bus stops, bulletin boards, store windows and other places all over town. After the event, they served no purpose, so they were quickly torn down and replaced with a new poster advertising the next big concert.

The only ones interested in this groundbreaking art were teenagers passionate about the bands and music, or hippies that were attracted to the poster's cosmic visual appeal.

Since these free spirits were the only ones collecting at the time, very little (if any) attention was paid to the state of preservation. Any knowledgeable collector will tell you that this is the primary factor in determining the value of any collectible! Very few of these works of art were carefully saved, and it is indeed a miracle that any have survived in mint condition today.

There is a near-unanimous consensus among historians that the 1960s represented the most significant social movement of the 20th century.

"The culture wars that began in the sixties, about drugs, about military incursions into foreign countries, about sex and human rights, the environment and on and on, are still being fought. All the issues are correct, and they are rooted in the activism of the sixties. The values have not only survived in many ways they are the mainstream values of our times."

These fantastic works of art are, without a doubt, the most authentic historical artifacts of this historical era. Unlike any other collectible or art in the world, they most closely represent and embody the ideals and values that helped shape our nation — then and now. For this reason alone, the appreciation and importance of these unique works of art are guaranteed to grow with each passing year.

These works of art must be seen to be believed. Photographs and books simply cannot do them justice. The bold colors, cosmic lettering, and sexy imagery were all designed to stop a viewer in their tracks. Its goal to artistically convey the message that something truly special was going to be experienced at the event being advertised. Indeed, most people today agree that coming into contact with one of these posters is an event unto its self!

The famous concert promoter, the late Bill Graham, had this to say:

"These posters are so much more than historical documents or promotional tools; they are art, as the music itself is art, and in many cases, they are very fine high art."

6. Vintage rock concert posters enjoy a broad base of demand and popularity!

While most collectibles are sought after by small niches of specialized, esoteric enthusiasts, these historical works of art are now becoming sought after by many millions of people around the world! Consider the following:

This is one of the critical factors why I believe the future demand and desirability of these rare works have literally unlimited upside potential.

Collectors are willing to pay a considerable premium for the prestige that comes with being able to display their rare acquisitions right on their walls!

Art collectors garner constant praise from their family, friends, and associates who are also lucky enough to view their rarities. Collections of other material are all but impossible to display and mainly remain far from view, securely locked up in bank safe deposit boxes.

Psychedelic art looks wonderful when displayed in even the most elegant mansion, particularly in billiards and game rooms, home theaters, pool houses, and other fun places in the home.

It can easily be argued that these works hold the most significant appeal to the most wealthy and lucrative segment of our society, the baby boomers. The teenagers of the sixties are now our nations hedge fund managers and CEO's and represent the wealthiest class of individuals in the history of our nation.

The same folks that think nothing of $80,000 BMWs and $2,000,000 vacation homes are now looking to acquire genuine remembrances and historical artifacts of their youth. These rare works of art are ridiculously cheap to this class of people, and they have the surplus of funds ready to be deployed when presented with the unique opportunity.

Experienced collectors know that when the art establishment finally declares a category class of art to be historically significant and worthy enough to be displayed in their sacred spaces, it is a loud and clear "buy signal" to jump aboard.

These exhibitions have been —and will continue to be—instrumental in broadening the awareness and appeal of vintage concert posters as millions of new people are exposed to their unique beauty, rarity, and historical importance.

10. Vintage rock concert posters are a stable and secure store of value that provides a hedge against inflation and today's horrendously volatile financial markets.

After 25 years of paper asset inflation, savvy individuals are now desperately trying to place a portion of their funds into stable and secure tangible assets that are free from the volatility and inflation that is so prevalent in today's financial markets.

1960s psychedelic rock concert posters perfectly meet these criteria. The value of this art does not fluctuate wildly day by day (or hour by hour)! The appreciation and demand for these rarities increase with each passing day while the tiny available continues to dwindle!

11. Vintage rock concert posters in mint condition are vastly undervalued and under-appreciated compared to the prices of similar pieces in used condition!

It can be strongly argued that this fact alone is enough for psychedelic art to earn the title of "Most Undervalued Collectible in the World Today."

Let's take the average poster that was printed in an edition of 1000 pieces. Of those, probably 10-20% (100-200) exist in any condition today. Of these 100-200 surviving pieces, it's safe to say that no more than 5-10% (5-20) have somehow miraculously survived in mint condition. This tiny handful of posters, if they can be found and purchased at today's ridiculously low prices, represent the very best value in the collectibles market today!

Take a look at the chart below. You'll see that in coins, stamps, baseball cards, and comics, it's common for mint condition collectibles to trade at 20 - 60 times the average. This price differential simply represents the difference in rarity between mint condition and used examples. 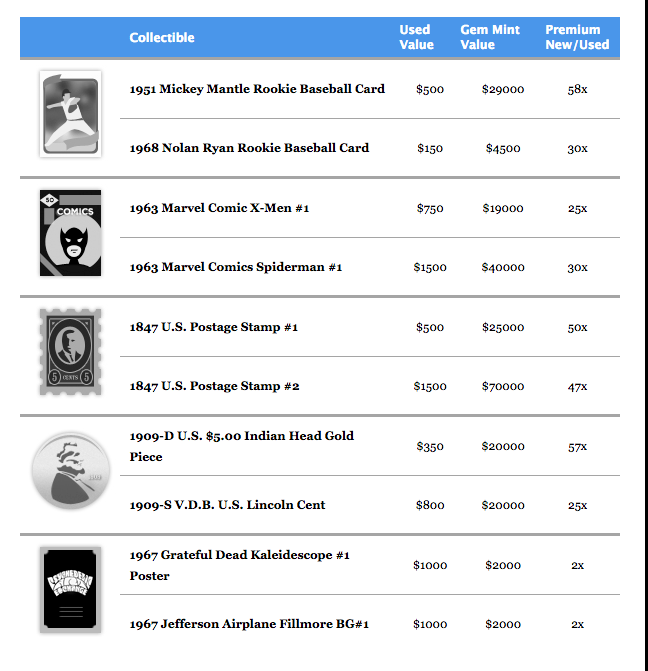 You can currently acquire mint condition specimens for a tiny fraction of what they should be and what collectors believe they will eventually be. This allows savvy collectors to buy the very best for a fraction more, all the while enjoying a collection that should skyrocket in desirability as the rarity of mint condition items becomes understood.

While concert posters have been highly sought after and actively collected since they were initially issued, the majority of collectors prefer to wait for an area to become seasoned. Most collectors want to see a category demonstrate a proven track record of desirability before they become motivated to begin their own acquisition of an item. Indeed, the very definition of an antique is a collectible having a high value due to its considerable age.

These rare works, issued from 1965-1969, are now 50 years old, making them far more desirable to collectors than they were in the seventies, eighties, and nineties. These posters, from an age standpoint, are just now coming into their own, making this the very definition of a true ground floor opportunity.